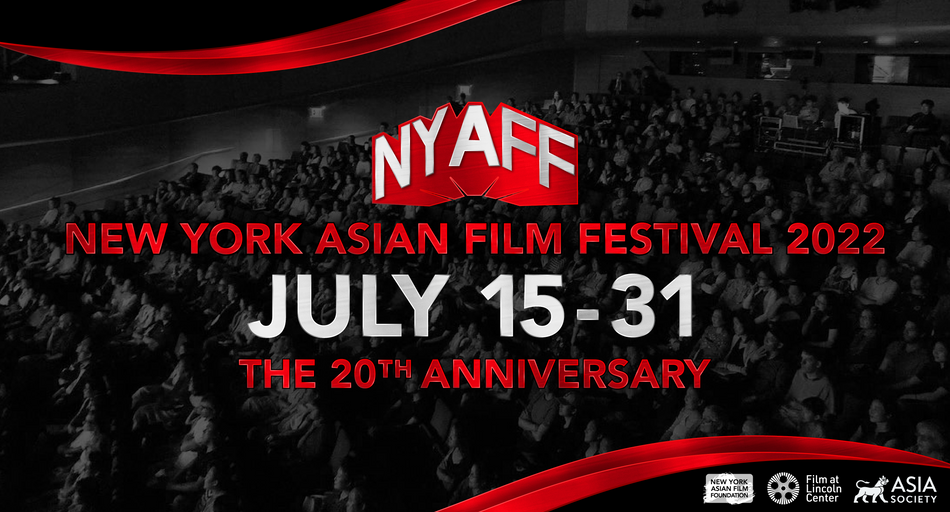 New York, NY (June 16, 2022) – On July 15, 2022, the New York Asian Film Foundation and Film at Lincoln Center will kick off the 20th anniversary edition of the New York Asian Film Festival (NYAFF) with a full return to big-screen viewing. Following a fully virtual 2020 edition and a hybrid 2021 edition, NYAFF is delighted to present this year’s 60+ new and classic titles fully in person from July 15–31, 2022.

NYAFF remains fully committed to increasing exposure of Asian representation on screen and providing opportunities for audiences of all communities to experience the diversity and brilliance of Asian and Asian American cinema. The 20th anniversary lineup will include world, international, North American, U.S., and New York premieres, showcasing the most exhilarating action, comedy, drama, thriller, romance, horror, and art-house films.

“We’re thrilled to be back fully in person after two years, the best and only way to really have a festival, in my view,” said Samuel Jamier, Executive Director of NYAFF and President of the New York Asian Film Foundation. “We’ve been really impressed with the quality and diversity of films made during the trying times of the pandemic, and we’re especially excited that we can once again welcome guests from all over Asia to the stage at FLC, giving them the spotlight they deserve. We look forward to celebrating NYAFF’s 20th anniversary and 20 years of discovering films from half a world away, a region now universally celebrated for its great filmmaking and storytelling, with some of today’s most talented and acclaimed stars and renowned filmmakers.”

The previously announced NYAFF Opening Film is the international premiere of the propulsively paced Thai romcom Fast & Feel Love, directed by Nawapol Thamrongrattanarit (Heart Attack, NYAFF 2016). The director will be joined at Film at Lincoln Center on opening night by his leading actress, Urassaya “Yaya” Sperbund, who will be honored on stage with the Screen International Rising Star Award. The Thai-Norwegian actress, already an established star in the region, is known for roles in popular TV series and films, such as Witthaya Thongyooyong’s Brother of the Year.In Fast & Feel Love, Sperbund brilliantly plays the supportive girlfriend of a world champion sport stacker who only has time for his game. When she finally comes to her senses and dumps him, he must learn basic adulting skills to find a way to win her back. Stacking is a genderless, ageless, border-free sport, and the exuberant film is nearly as fast-moving as its sport-stacking protagonist.

NYAFF’s South Korean lineup, presented with the support of the Korean Cultural Center New York (KCCNY) and as bold and vibrant as ever, will showcase, among many others, Confession from Yoon Jong-seok, a labyrinthine tale of betrayal and intrigue anchored by tension-charged performances from So Ji-sub (NYAFF 2009 Rising Star Asia honoree) and Kim Yun-jin; Yeom Ji-ho’s taut comedic thriller Next Door, in which a would-be police cadet unexpectedly finds himself embroiled in a real-life crime-fighting test; and the illuminating LGBTQ documentary I Am More by Lee Il-ha (Counters, NYAFF 2018) following the captivating journey of glamorous drag queen and transgender trailblazer More, who will join us for the film’s North American debut. This year marks 140 years of friendship between Korea and the United States, and KCCNY will be hosting exciting events to celebrate this meaningful history of cultural exchange. Additional lineup announcements from South Korea will follow: NYAFF is bringing its largest number of guest filmmakers ever.

NYAFF’s Japanese lineup, supported by the Japan World Exposition 1970 Commemorative Fund, is led off by the U.S. premiere of megahit Shin Ultraman, a shiny new reimagining of the most successful tokusatsu-versus-kaiju series of all time from creative titans Hideaki Anno (writer-producer) and Shinji Higuchi (director), the power duo behind Shin Godzilla, with the director present at FLC. Other highlights include NYAFF regular Kazuya Shiraishi’sLesson in Murder, a seductive serial-killer thriller that is rife with shocking twists and nauseating turns; the delightful debut theatrical feature of actress Non (star of Hold Me Back, NYAFF 2021), Ribbon, an intensely personal vision of an artist trying to reclaim her identity and her future promise amid the pandemic; Broken Commandment, the immensely moving new adaptation of Toson Shimazaki’s classic novel about a Burakumin school teacher who must find the courage to fight for human rights, or give up everything; Takuya Kato’sGrown-ups, a sharply observed dissection of a volatile relationship between two college students that may leave some viewers gasping for air; and the new narrative feature from New York-schooled documentarian Mayu Nakamura, Intimate Stranger, a disturbing psychological chiller about a single mother’s search for her missing son.

NYAFF’s recently announced partnership with the CineCina Film Festival (CCFF) is expected to allow both partners to reach a wider audience, promote enriched cultural exchange, and provide unprecedented access to the latest releases from mainland China. The inaugural CineCina Selections will include Zhang Ji’s riveting romantic dark thriller Fire on the Plain, in which a cop working a serial-killer cold case finds clues that pull him back into his fraught past; Geng Jun’s deadpan dramedy Manchurian Tiger, which narrates the revenge of parents-to-be during a freezing winter in Northeast China; Niu Xiaoyu’s often surreal Virgin Blue; and Wei Shujun’s po-faced mockumentary about filmmaking, Ripples of Life, in which a crew constantly has to rewrite their script after arriving on location.

NYAFF’s Taiwan lineup features some of the most striking new films of the past year, including the international premiere of Dan-Quei Shen’s The Funeral, a superlative horror film that follows a struggling single mother who returns to her rural family manse when her grandfather dies. Other highlights are Mama Boy from Arvin Chen (a NYAFF Uncaged competition juror in 2020), which stars heartthrob Kai Ko as the titular young man who falls for singer-actress Vivian Hsu and finally comes of age at 29; and Terrorizersfrom Ho Wi Ding (100, NYAFF 2012), with Austin Lin (iWeirDO, NYAFF 2020) as a delusional young man who attacks a couple with a ninja sword before the film is deconstructed through flash-backs and forwards exploring the relationships between its four central characters.This year’s Hong Kong Panorama—presented with the support of the Hong Kong Economic and Trade Office in New York, the Festival’s longest-standing partner and sponsor organization—shines a spotlight on a selection of local stories through themes like family, food, and career, and the Hong Kong way of life in general, including five exhilarating new dramedies (among others): playwright-theater director Kearen Pang’s second feature, Mama’s Affair, is a brilliant, female-driven, cross-generational story that stars veteran Teresa Mo and Keung To and Jer Lau, both of pop sensation Mirror; Amos Why’s Far FarAway follows a newly minted Don Juan as he drives his dates around town, in a loving tribute to the cultural and natural riches of Hong Kong itself; Sunny Chan’s Table for Six, starring Stephy Tang (NYAFF 2018 Rising Star Asia honoree), a bedroom farce that takes place mostly at the dinner table ​​as the characters share meals and rekindle their romance; the world premiere of Benny Lau’s We Are Family, with Eric Tsang (NYAFF 2017 Lifetime Achievement awardee) and Carlos Chan as rental surrogate family members for a range of functions. And the film debut of actor Justin Cheung and Li Ho, the rambunctious Legendary in Action!, a metatextual ode to the region’s most iconic film genre, featuring legendary real-life wuxia/kungfu star Chen Kuan Tai in a sublimely moving drama about the triumph of the creative spirit.

Marking NYAFF’s 20th anniversary and the 25th anniversary of the establishment of the Hong Kong Special Administrative Region, five absolute, modern classics directed by five grandmasters of the city’s film industry will be screened. The Festival will be co-hosting, with the Hong Kong Economic and Trade Office in New York and Film at Lincoln Center, a free outdoor screening in Hearst Plaza, Damrosch Park of Wong Kar Wai’s queer relationship classic Happy Together on July 16. One of the most searing romances of the 1990s, the lushly stylized portrait of a relationship in breakdown features superstars Tony Leung Chiu Wai and Leslie Cheung Kwok Wing as a couple traveling through Argentina. It’s an intoxicating exploration of displacement and desire, shot by Christopher Doyle.

The other classics will be part of an all-day must-see series of landmark movies on July 30 at Asia Society: Stephen Chow’s uproarious Kung Fu Hustle; Alan Mak and Felix Chong’s crime thriller Overheard; Johnnie To and Wai Ka-Fai’s Running on Karma, starring Andy Lau as a bulked-up monk; and the milestone horror film The Eye, from the Pang brothers.

A second wave of announcements will be made shortly containing the Centerpiece and Closing films, special guests, major awards, and exciting events. NYAFF is also thrilled to host its first post-Covid Opening Night Market, with live music and Asian food stalls, as well as a range of other parties and receptions.From the deadly serious to the gleefully absurd, from the disquieting to the freaky, NYAFF continues to celebrate the most vibrant and provocative cinema out of Asia today.

FIRST WAVE OF LINEUP— more titles to be announced(Please note the program is still subject to change.) NYAFF TICKET PRICING AND INFO:Tickets for the 20th Anniversary New York Asian Film Festival go on sale Friday, July 1 at 12pm ET, with early access for FLC Members beginning Thursday, June 30 at 12pm ET. Tickets are $15 for General Public; $12 for students, seniors (62+), and persons with disabilities; and $10 for FLC Members. See more at FLC and save with a 3+ Film Package or FLC All-Access Passes ($199 for General Public and $99 for Students). Note: Opening Night and premium events are excluded.

Other premium events (to be announced) will be available at $25 for the General Public and $20 for Members, students, seniors, and persons with disabilities.

Asia Society will be screening 16 films on July 23 and July 29–31, with pricing to be announced at nyaff.org.